The NATO Mountain Warfare Centre of Excellence (NATO MW COE) successfully conducted the 5-day Combat Functions in Mountains, Seminar for Planners. The seminar was held in Poljče between 2 and 6 October 2017.

The purpose of the seminar was – among others – to contribute to the development of future standards related to Mountain Warfare Education and Training. In addition, the seminar aimed at contributing to NATO’s operations planning process, either as an operational-level or functional-area planner, while serving within a joint operational-level headquarters. Furthermore, the seminar provided staff officers from different branches at the CJTF with the knowledge needed for successful and effective planning and leading operations in mountains, taking in consideration specific impact of difficult terrain on combat functions.

One of the main goals was to establish recommendations regarding the future development of light mountain infantry units and other branches, as well as capabilities of units that with their functional categories carry out combat functions.

The seminar has been attended by participants from Austria, Belgium, Croatia, Germany, Norway, Poland, Slovenia, Spain and USA, and hosted lecturers of the Austrian, Croatian, Italian and Slovenian armed forces. The seminar involved also academia-level lectures, held by representatives of civilian and military institutions, such as the Slovenian Faculty of Arts, Slovenian Faculty for Social Sciences, Croatian Military Academy and the Slovenian Armed Forces Military Museum. A significant contribution has been given by the NATO MILMED COE in Budapest, Hungary and the NATO CIMIC COE in The Hague, Netherlands.

During the seminar, several common conclusions were arrived at which could serve for the planning of possible operations in mountains. As the seminar involved the MW community of interest, it proved to be unique opportunity to share and merge international know-how on this subject matter. 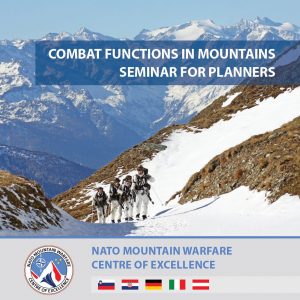 The NATO Mountain Warfare Centre of Excellence (NATO MW COE) successfully conducted the 5-day Mountain Warfare Subject Matter Expert (MW SME) Exchange of Information Seminar dealt with movement in the mountains, as well as testing equipment and techniques. The seminar was held in Poljče and Bohinjska Bela climbing area between 11 and 15 September 2017.

The seminar was in line with the main effort of the NATO MW COE, and brought together NATO and PfP members – national military experts from Austria, Croatia, Germany, Italy, Norway, Poland and the United States of America.

The seminar programme focused on comparing and exchanging particular mountain-specific knowledge, required for planning and executing mountain warfare (MW) training and operations. The aim of the seminar was also to contribute to the NATO MW Publication development.

The seminar was divided into theoretical lectures, syndicate work and practical testing. With emphasis given on the practical part, a variety of systems for anchoring, trespassing of obstacles, ascending and descending, safety systems were tested. All the data measured by a dynamometer were transferred to a specially designed software and later synthesized into recommendations for future use of such equipment and devices.

During the seminar, it has been established that this event has been another step forward towards exchanging subject matter knowledge and experience.

The seminar’s topics were of particular interest to the participants as they were addressed through a practical approach to professional technical measurements.

In the future, the NATO MW COE will involve additional national and international experts, who will contribute to a more in-depth discussion and recommendations regarding the subject matter topics. 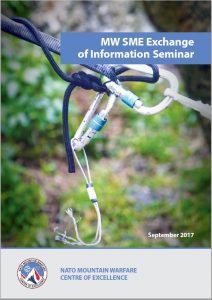 The NATO MW COE organized a seminar on Combat Service Support (CSS) in Mountains Operations from 4-8 November 2019, with the aim of analyzing and discussing the capabilities of CSS units as part of a Light Mountain Infantry Brigade. The seminar was designed to provide a general understanding of the employment, tasking and capabilities of CSS in mountain operations.

The requirement to conduct military operations in mountainous regions presents commanders with challenges distinct from those encountered in less rugged environments, demanding increased perseverance, strength, will, and courage. The terrain, characterized by steep slopes, great variations in local relief, natural obstacles, and a lack of accessible routes, restricts mobility, drastically increases movement times, limits the effectiveness of some weapons, and complicates supply operations. Combined with the terrain, the weather, variable with both the season and the time of day, can greatly affect mobility and tactical operations. Even under non-violent conditions, operations in a mountain environment may pose significant risks and dangers.

The 4-day seminar was attended by 20 participants and lecturers from 9 nations and 3 NATO COEs. It was mainly conducted in the classroom (ex-cathedra teaching and discussion), with certain topics being covered outdoors.

The lectures were related to a general overview of CSS, its structure, assets and capabilities, and its role in support of mountain operations.

The instructors/lecturers, from Austria, Croatia, Germany, Italy, Slovenia, NATO MILMED COE and NATO ENSEC COE, belong either to the military environment or to the academic sphere. They are eminently recognized as Subject Matter Experts, with practical experience in the field.