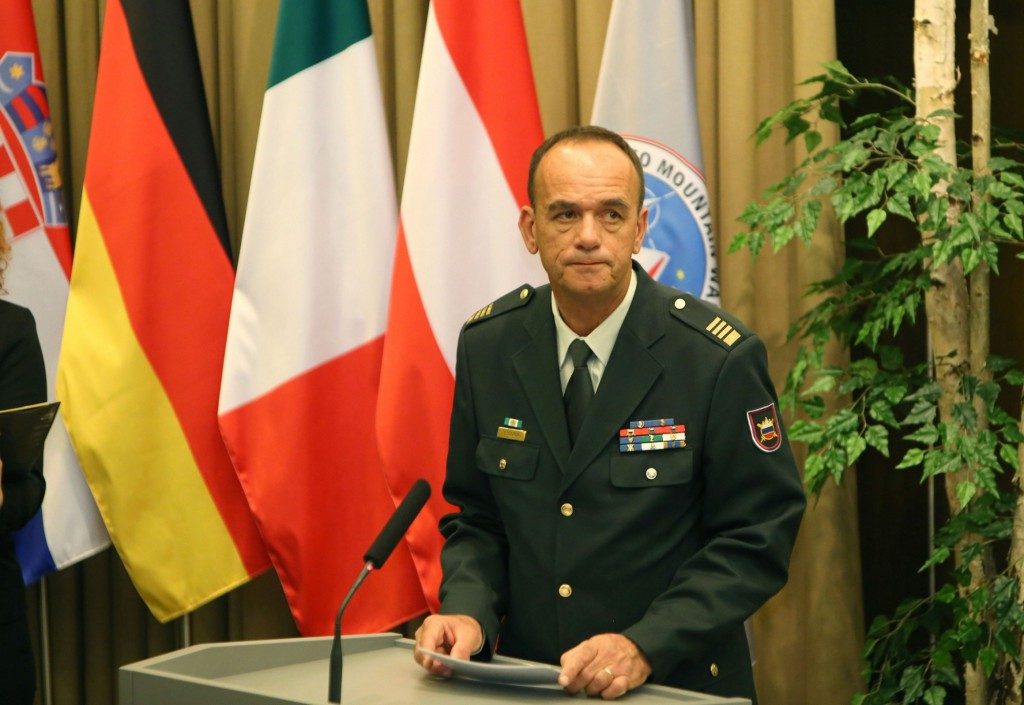 On 23rd March, 2017, the NATO Mountain Warfare Centre of Excellence (NATO MW COE) marked the second Anniversary of signing the Memoranda of Understanding on the Establishment of the NATO MW COE in Washington on 25th March, 2015.

In his speech, the Director of the NATO MW COE, Colonel Boštjan Blaznik noted: “Currently, the Centre is manned by five Nations. We are proud to present their flags here in the Centre and to announce that they will soon be joined by Romania as the next Sponsoring Nation. Reflecting and advancing the interests of the participating Nations, the Centre is conducting development of concepts, doctrines, lessons learned, and education and training in line with the NATO Concept of Smart Defence. Though being one of the youngest members in the NATO COE community, it is a privilege and, at the same time, a strong commitment to fulfil the Vision and Mission as set by the Nations in the NATO MW COE Concept. As such, we are proud to be part of the NATO COE community, which is a significant asset for implementing NATO’S Transformational efforts.”

He continued: “We have had a year of intensive operation, during which significant steps have been made in the field of standardization. Following an initial study, the Centre proposed formally to NATO the preparation of a harmonised Standard for Mountain Warfare training. This proposal was received very positively and supported by NATO and partner Nations. As a result, the Centre has been designated as the Trustee of the Standard development, meaning the Centre is already recognised and is becoming a doctrinaire Mountain Warfare juncture. We will continue to foster interoperability with the goal to upgrade the knowledge on Mountain Warfare already existing at the national level and also within NATO, and integrating it into the Alliance and Partnerships. “

At the end of his speech, Colonel Blaznik thanked the NATO MW COE’s staff members for putting their great efforts in contributing to the promotion and operation of the NATO MW COE and sharing their subject matter expertise and concluded; “We, mountain soldiers, have a saying that with one step before the mountain peak we are still closer to the valley than the summit. And this is true, as the nature of our work is guided by challenges and opportunities,” and thanked all distinguished guests for joining the NATO MW COE members in celebrating their Anniversary.

The Mayor of Radovljica town, Mr. Ciril Globočnik hereinafter stressed that the Municipality is, thus, hosting the first and only international military organisation in Slovenia and stated: “With its activities, the NATO MW COE contributes indisputably to the visibility and the reputation of our Municipality, at the same time, introducing a number of other benefits to our environment. Good cooperation with the local community is of key importance, both with the Municipality, the local community and its inhabitants, as with the companies and societies, and concluded with congratulation on a successful operation in the first two years by wishing them  professional success also in the future.”

Chief of the General Staff of the Slovenian Armed Forces, Major General Andrej Osterman, in his speech, pointed out that the establishment of the NATO MW COE was not only an important achievement for the Ministry of Defence and the Slovenian Armed Forces, but also an achievement for the Republic of Slovenia as a NATO member. By reminding on the challenges in the process of establishing the NATO MW COE, the Major General summarised: “The analysis of the existing forms and structures, which are connected to Mountain Warfare has shown that the Alliance’s decision to establish a specialised institution was well founded. Mountain Warfare capabilities are well developed in individual States, which effectively use them within national contingents in different areas of interest.  Through the formation of the required Standards, the Centre will fill in the gaps and ensure the interoperability within the Alliance in the field of Mountain Warfare, which will contribute to the optimisation and a more effective operation of the multinational Alliance forces in Mountain Warfare conditions. By doing so, you follow your own vision actively to operate as a central institution for the development of Mountain Warfare, and, at the same time, provide support to NATO Member States, partners and other nations and international organisations. You are active in the international environment, which provides you with insight into the actual needs of the Mountain Warfare capability development.” Major General Osterman congratulated the members of the NATO COE on the occasion of celebrating their day.

The highlight of the ceremony was the lecture on Himalaya Alpine Climbing, held by Mr Marko Prezelj, a four-time winner of the “Piolet d’Or” award, which is the most prestigious mountaineering award. The award has been presented by the French mountaineering magazines, “the Montagnes” and “the Groupes de Haute Montagnes” ever since 1992 for the best climbs of the past year. Despite his mountaineering success, Marko Prezelj is also proud of the part of his professional career which he spent as an officer in the armed forces. 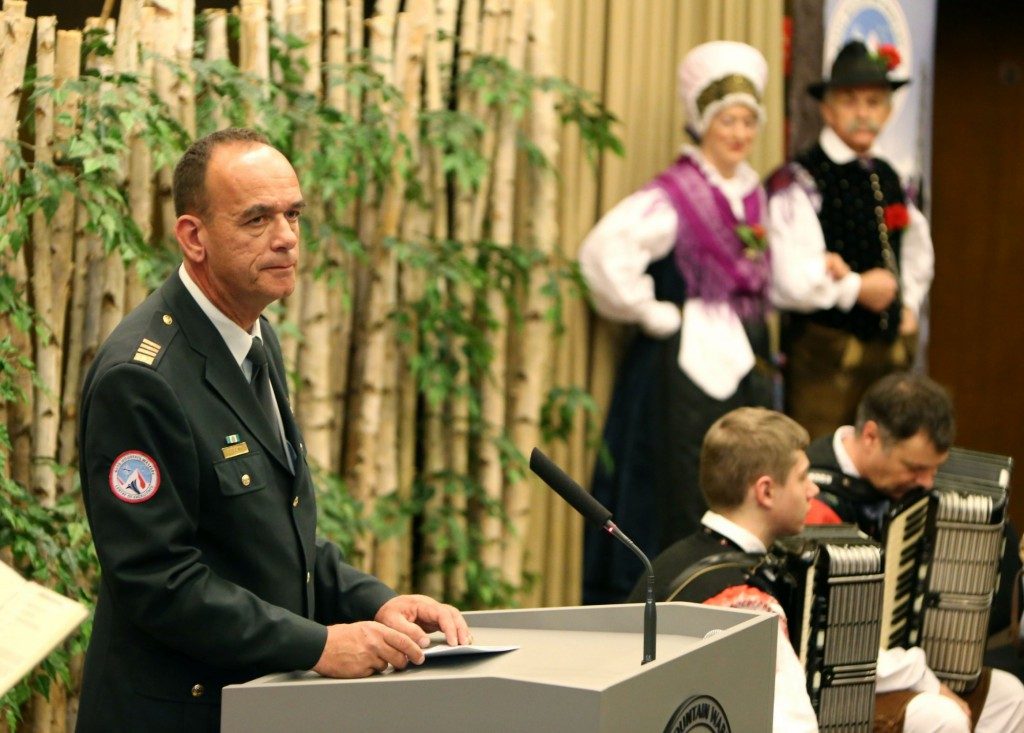 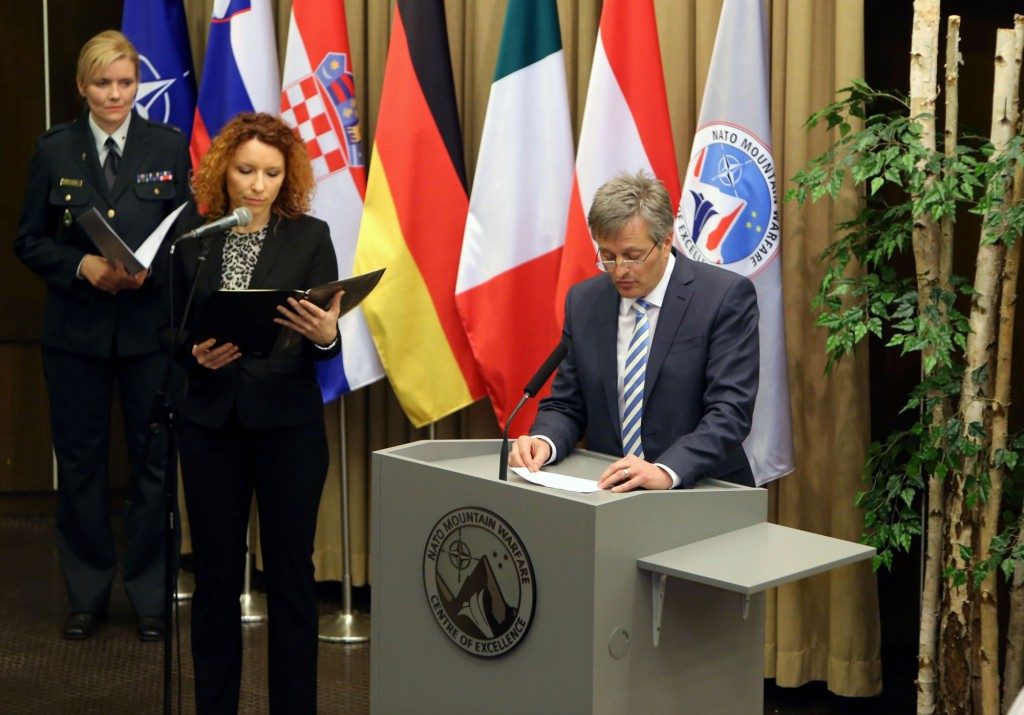 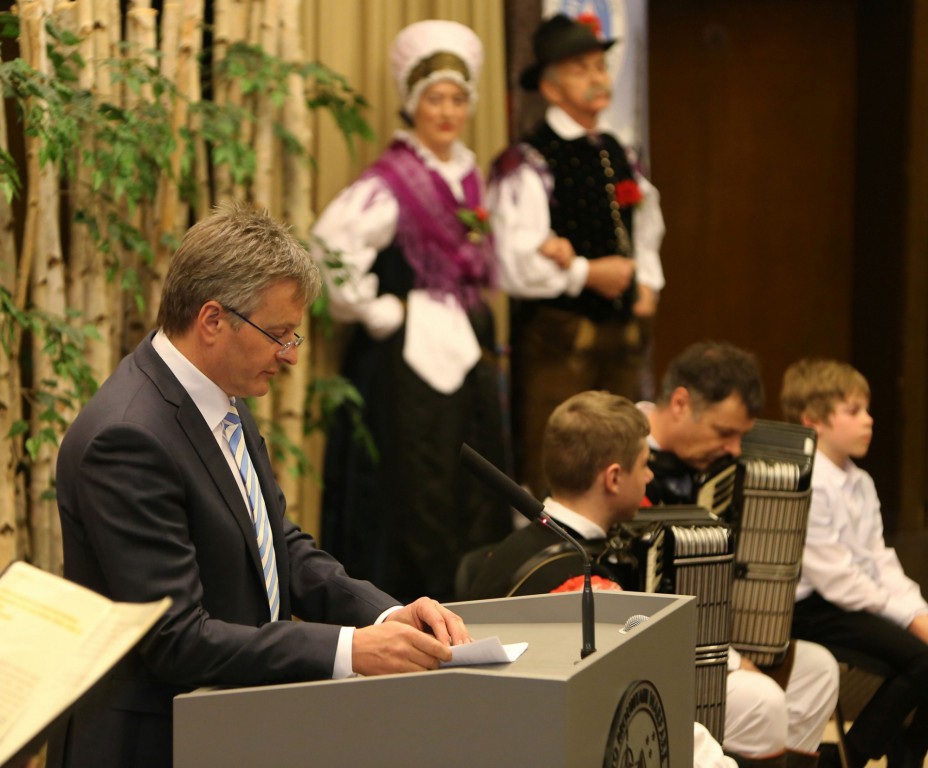 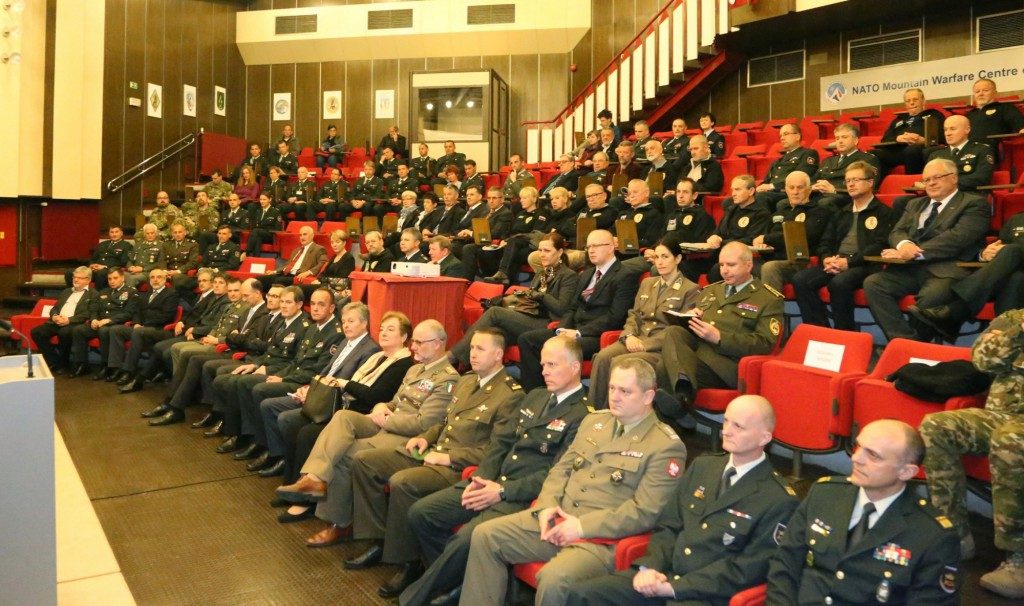 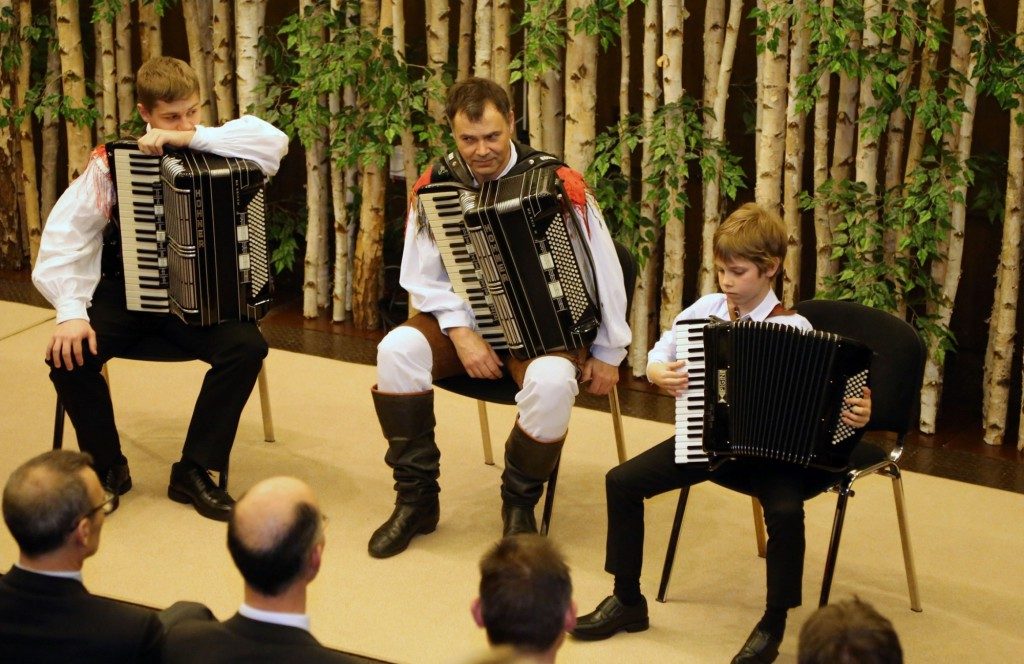 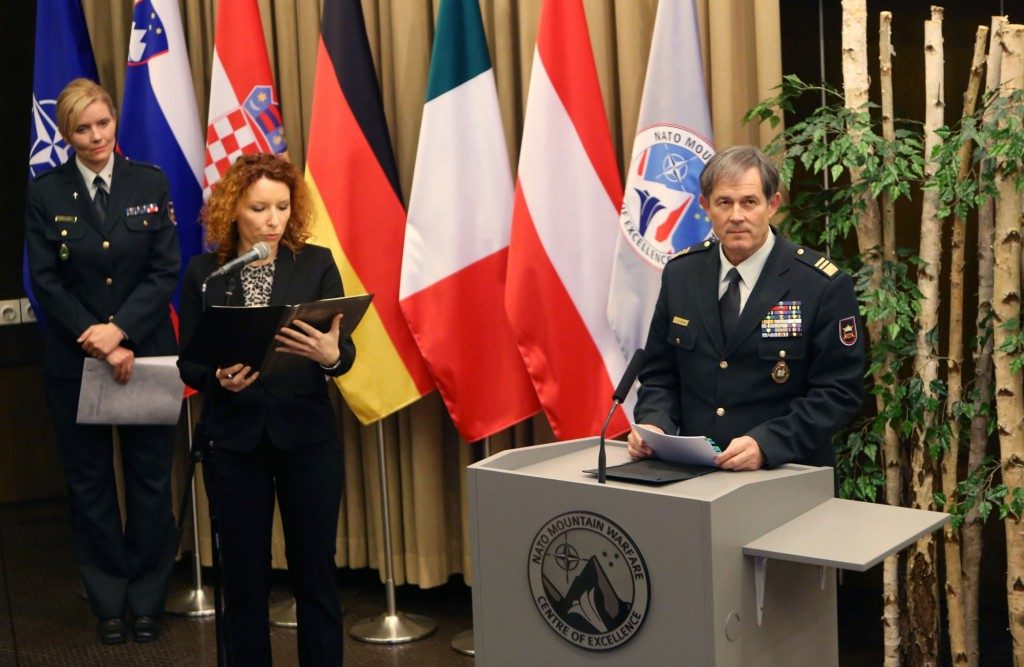 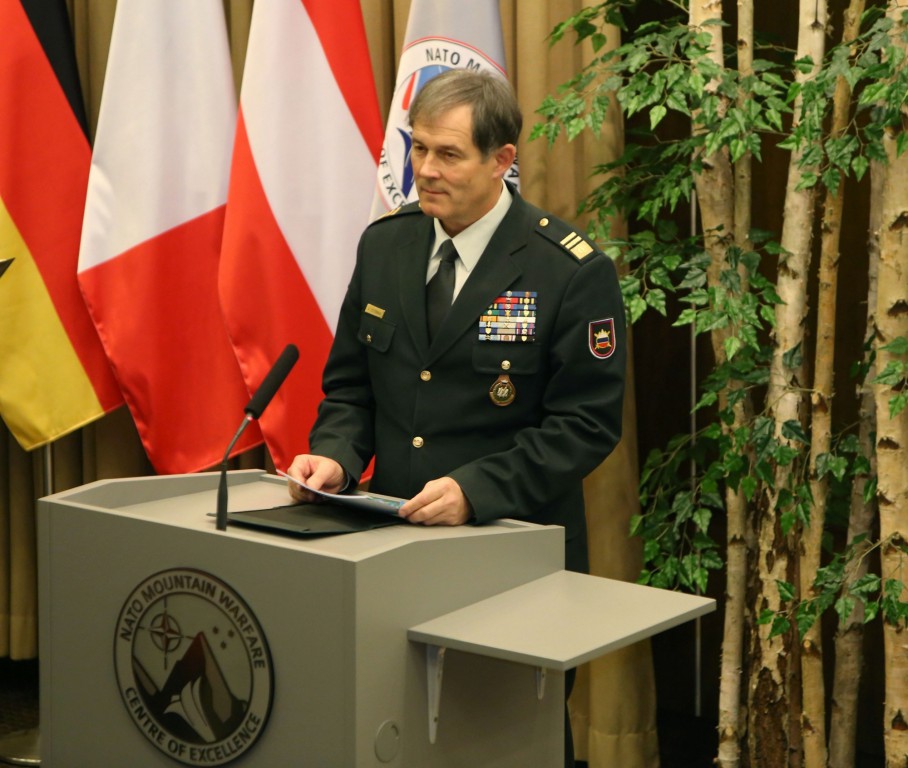 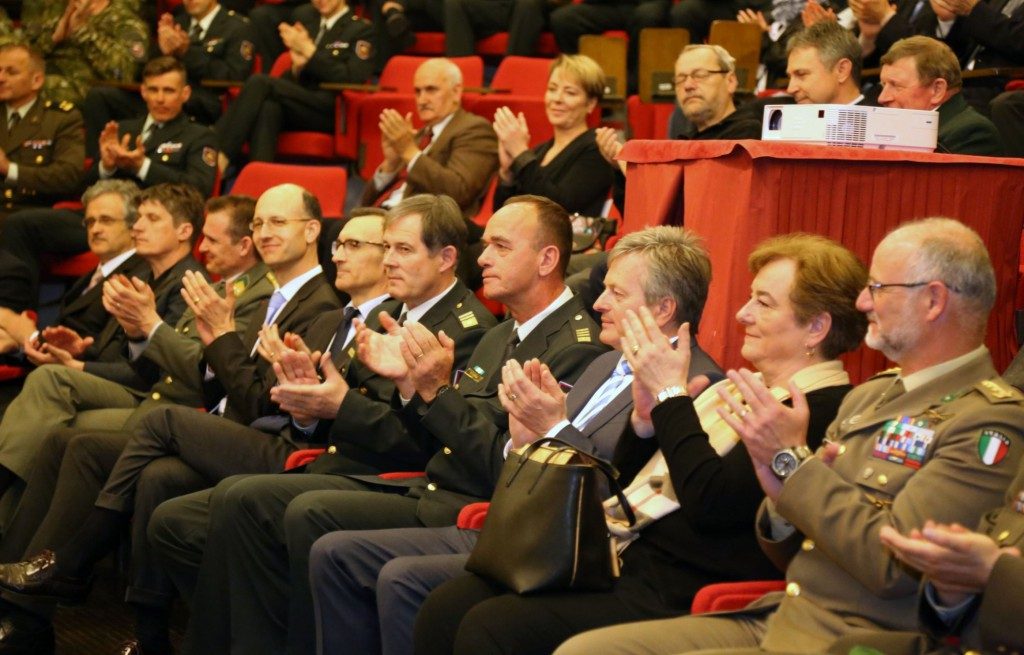 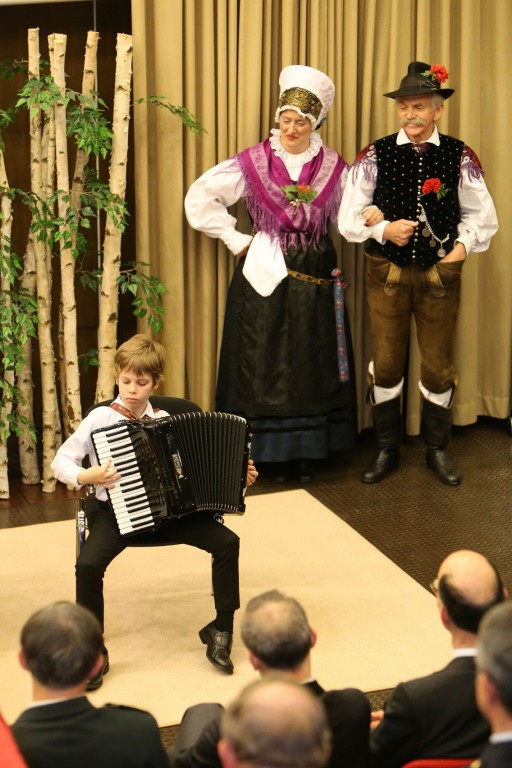 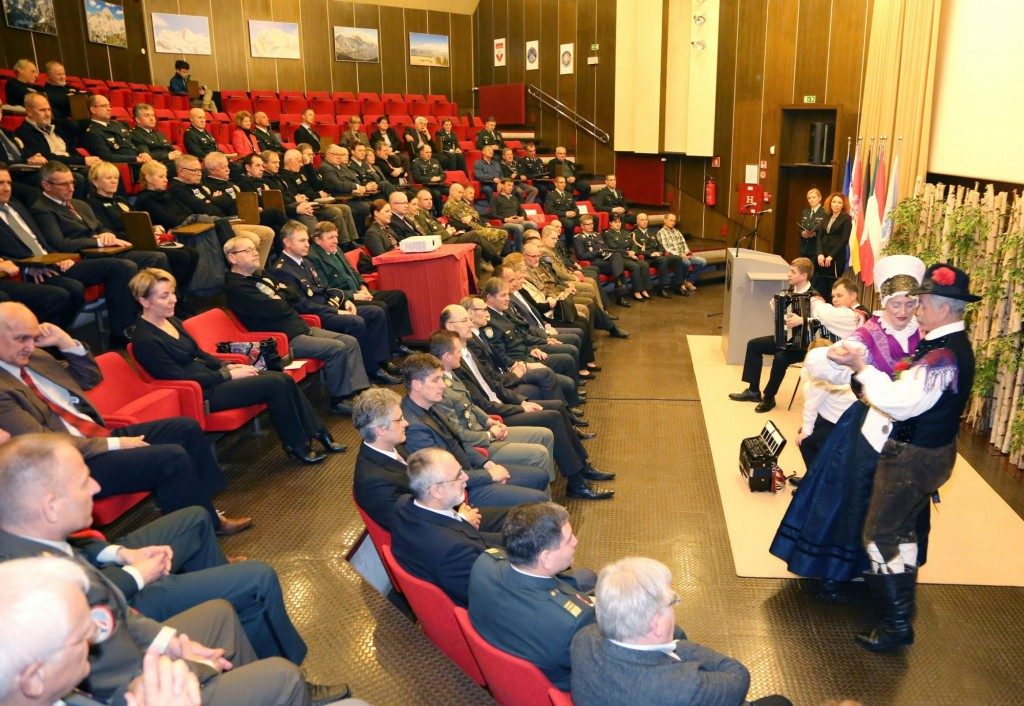 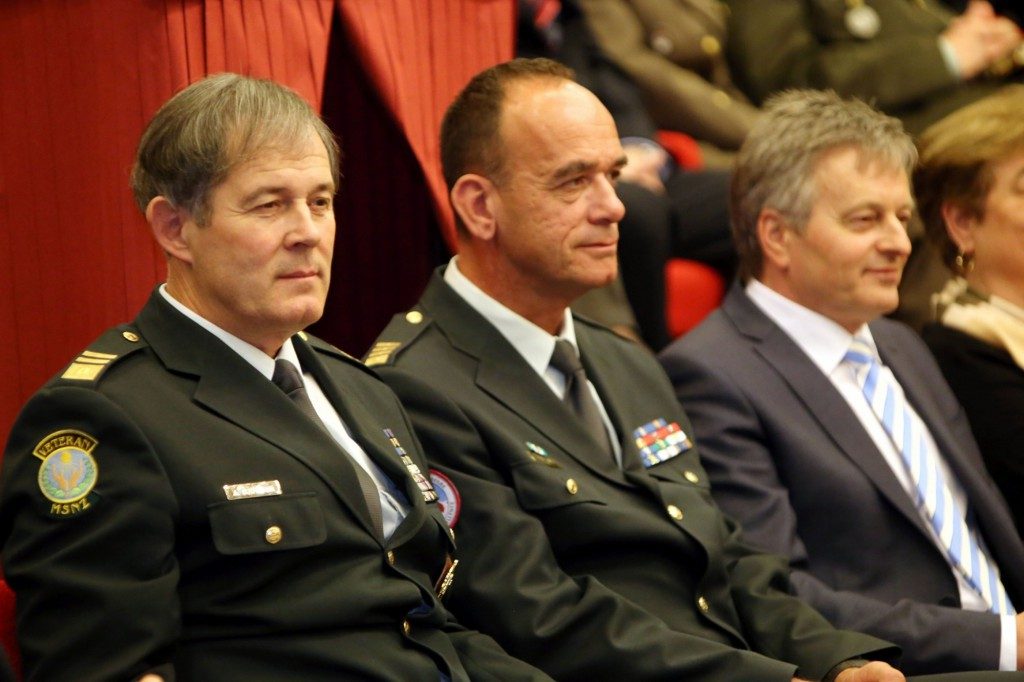 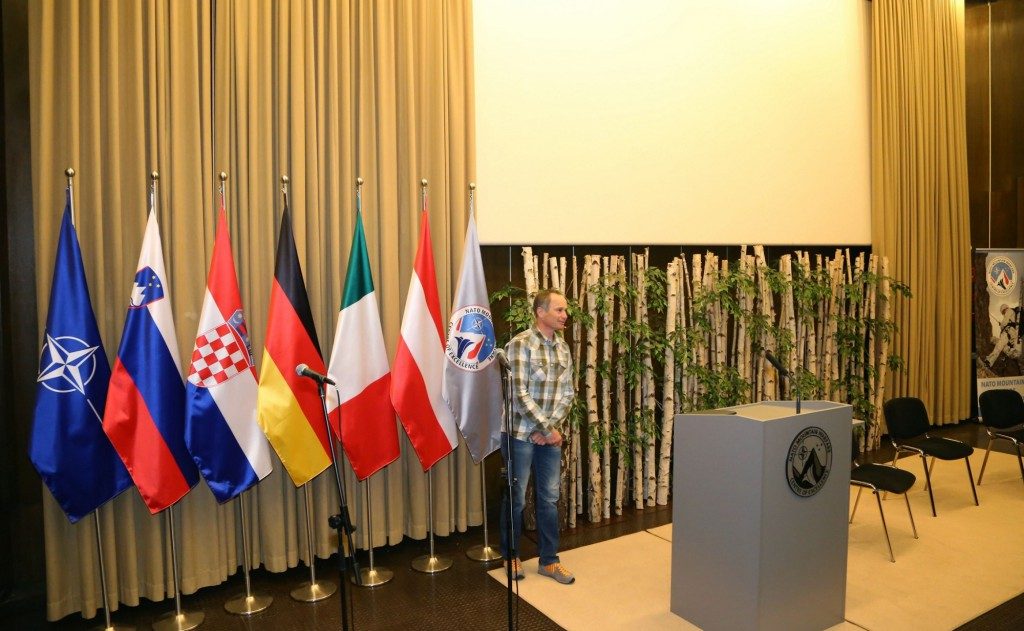 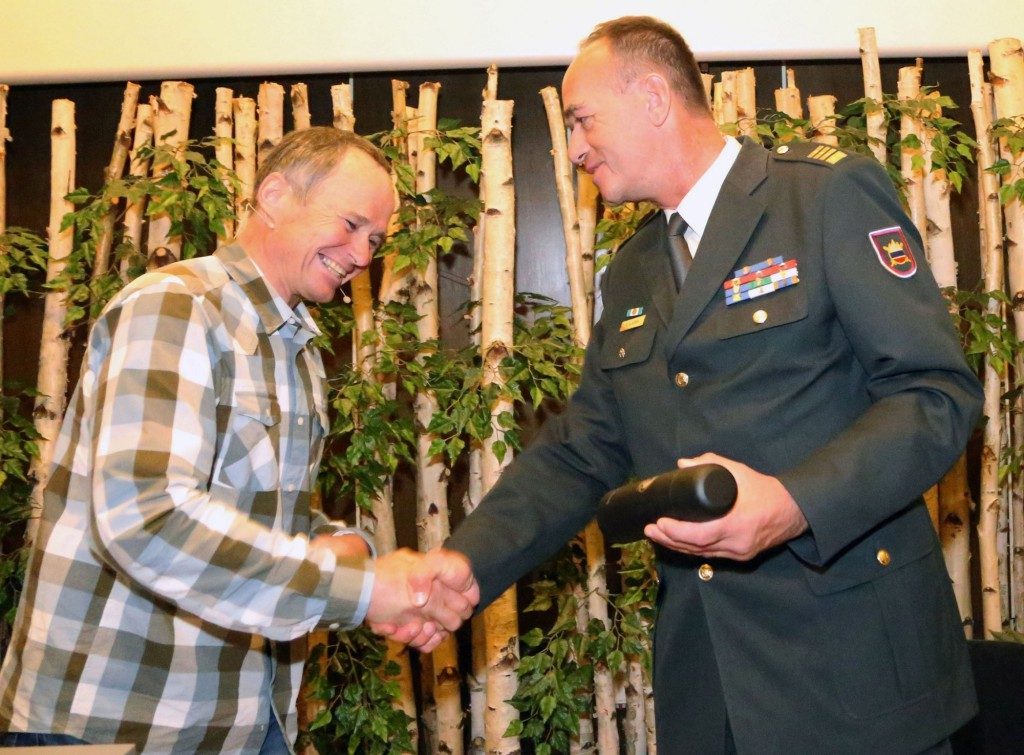 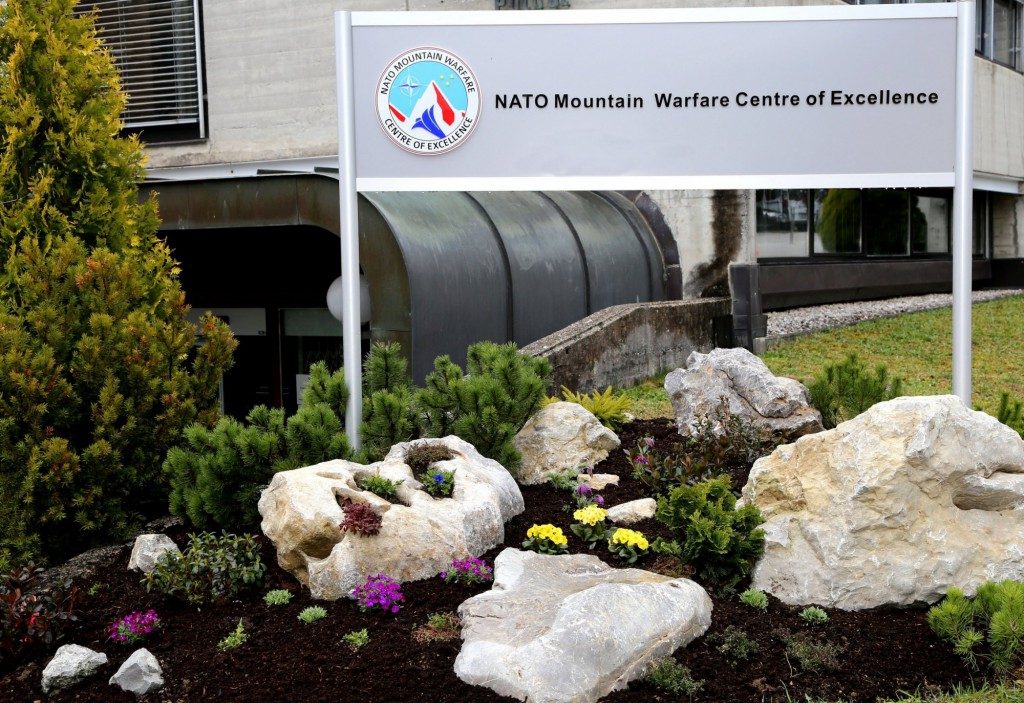