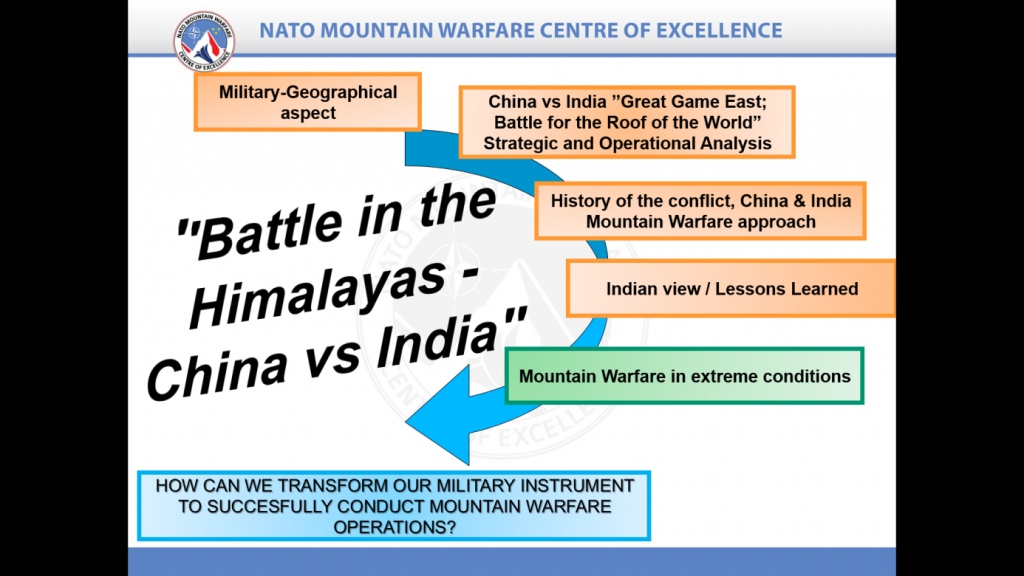 On 10 December the NATO Mountain Warfare Centre of Excellence (MW COE) organized a webinar entitled “Battle in the Himalayas – China vs India”.

The historical aspect shows us the critical role of the mountain environment in conflicts from ancient times (Hannibal crossing the Alps) to the World Wars in the 20th century and up to the Afghanistan wars: from Alexander the Great to the present day. Mountains cover 25% of the world’s land surface in different climatic regions, and as much as 12% of the world’s population lives in mountain regions. Mountains represent a watershed and water supply for more than half of humanity, for drinking, irrigation, industry, food, and energy production. Future situations of instability are also likely to occur in mountainous environments. NATO/HQs and troops may be deployed in Area of operation and conduct operations in mountainous terrain. This will require specific training, readiness and equipment, as well as a specific approach in terms of doctrine and tactics.

During the webinar, six SME’s from India, Italy and Slovenia presented the geo-military aspect, the strategic-operational view, the history of conflict, the Indian view and the strictly MW perspective.

More than 110 participants followed the event on the YouTube channel. It will be possible to see the entire event on the MW COE LL Portal.