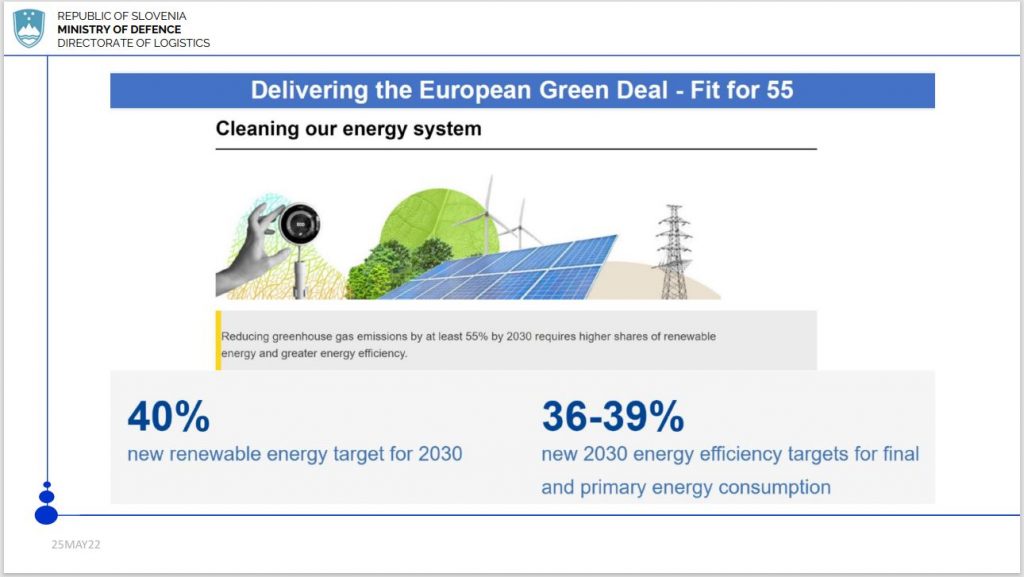 On 25th of May, Colonel Robert Šipec from Ministry of Defence (MOD) of the Republic  of Slovenia (SVN), presented to the members of the NATO MW COE the advantages and plan towards green transition of the defense system in Slovenia.

In recent years, many countries have implemented green policies, including in the fields of defence and security. Green defence addresses a wide range of general and specific problems and solutions, both global and national. The key in the area of defence energy and energy efficiency is decarbonisation, with the aim of maintaining or even increasing the existing efficiency of defence capabilities. In this area, the Republic of Slovenia actively joins the EU efforts to increase the efficiency and sustainability of the defence sector, to introduce sustainable energy supply and to ensure resilient and sustainable future operations. In this context, the Slovenian MOD is pursuing sustainable mobility projects and the search for alternative fuels for the defence and security sector. Also important for the defence sector is the implementation of the so-called EU Action Plan or Roadmap on Climate Change in Defence, which was launched in November 2020. The document focuses on three areas: CSDP operations, capacity development and partnerships. In doing so, the document contributes to the objectives of the European Green Deal to reduce emissions, protect biodiversity and energy efficiency, as the aim is to explore the relevance of climate impacts also to missions and operations.

In line with the priority of improving the energy efficiency of the defence system and the EU’s climate ambitions, Slovenia, together with the Member States, is working to collectively achieve the set objectives, taking into account national circumstances, equity and solidarity. The activities of the SVN MOD include energy renovations of infrastructure capacities, increasing energy efficiency and independence, projects to improve and sustain mobility, and investments in national and international research and development projects. In support of these activities and with a view to closer cooperation with science and industry, the Slovenian Partnership for Energy and Environment in Defence (SiEnE) was established in July 2020 to address the strategic and integrated approach of addressing energy and environmental challenges in the defence sector under the umbrella of the Ministry of Defence and TECES (Technological Center for Electrical Machines).

HYDROGEN AS AN ALTERNATIVE ENERGY VECTOR

Hydrogen is currently attracting a lot of attention both in Europe and around the world. The drive to reduce dependence on fossil fuels and the introduction of renewables in the defence sector have opened up new opportunities to promote hydrogen technology. Due to the nature of its origin, hydrogen is being explored and used as an alternative fuel, as it presents itself as a viable solution for the greening of defence and can be used in a wide range of defence activities. The MOD of the Republic of Slovenia identified hydrogen as a potential alternative solution at an early stage. Research and development in the field of hydrogen technology represents an important part of the Ministry’s investments. Slovenian Armed Forces (SAF) are one of the few defence forces to have introduced hydrogen technology into operational use as early as 2010. In the current experience of the SAF, hydrogen technology represents the future as an alternative and renewable source of energy. SAF activities and experience in the field of hydrogen led to the idea of building a defence and security infrastructure in the EU. This led to the conceptual design of the RESHUB project, where Slovenia is in lead.

Slovenia is involved in a number of projects to introduce energy efficiency. The Smart deployable camps Study (PamPIK) has outlined a strategy for the development of smart bases. Alenos, the green energy supply project for a shooting range, is the first project implemented under the PamPIK study. Slovenia has also joined the PESCO Energy Operational Function project. Three projects in the field of energy efficiency are currently under way as part of the EDA Cat B projects. The IAPUNIT project is developing a reformer of military heavy diesel for hydrogen production. HybriDT is a study on the deployment of hybrid powertrains for heavy military vehicles, ELUVAT is a Slovenian initiative on the development of general purpose electric off-road vehicles based on the use of hydrogen technologies.